Heaven On Earth – What Does It Mean?

What would you answer if your child asks you questions like the following, “If you say God is everywhere, why do you pray to God in heaven; where is God now?” If we are encouraged to ‘come into the presence of God’, where was He before we came together? We grew up with concepts and slogans.  There was a time that those who created world maps put Jerusalem in the centre of the world map because they believed Jerusalem was the centre of the world, and especially the temple in Jerusalem. They felt that it was the holiest spot on earth. I want to talk about the temple being the place where heaven and earth meet. 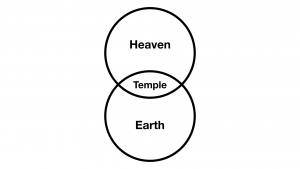 When Jesus was born and came into this earth, the overlapping area called the ‘temple’ was represented by Jesus Himself. Jesus, in fact, was the walking temple. When Jesus walked into the temple He found what was supposed to be a ‘holy place’, the place where God lived, had become a place for the money changers. It had been turned into a type of a ‘banking system’. Jesus overturned the tables and chased them out (Matt. 21:12). Jesus went further, He said, “Destroy this temple, and in three days I will raise it up” (John 2:19). It took 46 years to build the temple! We know what Jesus meant; that building was no longer where God is supposed to live. Jesus became a demonstration, putting God on display to the world. Everything Jesus did was prophetic, pointing to the future. He was the first-born and came to bring many sons to glory (Heb. 2:10). So He was the pattern Son and He is the one to follow. No one has ascended to heaven but He who came down from heaven, that is, the Son of Man who is in heaven (John 3:13 – NKJV). Jesus was in heaven on earth. The two circles (in the diagram) have become one in Him. This Jesus demonstrated how heaven and earth met in Him. That is an example of what is going to happen in the corporate son.

The true worshipers will worship the Father in spirit and truth because God is spirit! (John 4:23).  Do you not say, ‘There are yet four months, and then comes the harvest’? He was most likely referring to the Feast of Tabernacles. He was trying to break a certain mindset of always working by the calendar and postponing to a certain date. Behold, I say to you, lift up your eyes and look on the fields, that they are white for harvest (John 4:35). The Feast of Tabernacles has been busy unfolding ever since! It is not a date on the calendar. Yes, there will one day be a final, complete fulfilment, but it is busy unfolding, and we must not wait for a date on the calendar.

John on the Island of Patmos was in the spirit on the Lord’s day and he heard a VOICE, and he turned to see the voice. He wanted to see who and what caused the voice. He saw the seven golden lampstands representing the completion of the Church of Jesus Christ on earth. In the midst of them, he saw someone who resembled a human being, but you know it is the Son of God (Rev. 1:12-18 see Moffat’s translation). This is what I believe is going to happen; it has to do with the completion of the corporate Temple in the earth, a Temple consisting of people, sons of God; those who love God, who are born again, who are part of this corporate Temple. And the voice of God is going to be heard from this corporate Temple, worldwide. The world will turn to see the voice, and they will see the Church which has been despised in the earth. Jesus said, “I will build My Church and the gates of hell will not prevail against it” (Matt. 16:18). His voice, like the sound of many waters, will come out of this corporate Temple.

Where is Jesus now? He is not yet visible, but He is here! Where is heaven? He has seated us with Him in heavenly places (Eph. 2:6), yet you are right here. This Jesus, who became the living, walking Temple of God, was acting prophetically about what was yet to come on the corporate level.

The meaning of the word ‘omnipresence’ – God is spirit and He is everywhere. Where can I go from Your Spirit? Or where can I flee from Your presence?  If I ascend to heaven, You are there; If I make my bed in Sheol, behold, You are there (Ps. 139:7-8). God is everywhere but there are also special manifestations of His presence. God sometimes manifests Himself specifically. This omnipresent God, who is spirit, who is everywhere; He is in the highest heavens, He is here – that God came and overshadowed Mary, a young girl, and she conceived the Son of God. That is how personal God can become.

Jesus came to this earth in the form of a human being (John 1:1-14). Jesus was God made flesh. Then Jesus would say, I am in the Father and the Father is in Me (John 14:11). It would be wrong to interpret it, that the omnipresent God who is everywhere has come out of the ‘everywhere’ and confined Himself to be in the Son. That is not accurate. In a special manifestation He gave birth to His Son and in fact, His Son had to demonstrate Him to the world. The event of the incarnation should not be interpreted to be that God the Son left the highest heaven and came into the world and confined Himself to the earthly body of Jesus. This would mean that He divested Himself from His omnipresence. Look what Paul says about the Son. He is before all things, and in Him, all things hold together (Col. 1:17). This is the Son he is talking about, but the Son and the Father are one. The Son is continually upholding the universe by His Word of power (Heb. 1:3). Jesus said, “Before Abraham was, I am” (John 8:58). The pre-existent Christ who became flesh. God is everywhere all the time, but there are times that He manifests Himself in a very personal way.

Jesus released some insights into God’s ultimate plan. I am in the Father, and the Father is in Me (John 14:10). Jesus answered and said to him, “If anyone loves Me, he will keep My word; and My Father will love him, and We will come to him and make Our abode with him (John 14:23). God is looking for a house, a temple – not a building! (Isa. 66:1-2) It is to your advantage that I go away; for if I do not go away, the Helper will not come to you; but if I go, I will send Him to you (John 16:7). But when He, the Spirit of truth, comes, He will guide you into all the truth; for He will not speak on His own initiative, but whatever He hears, He will speak; and He will disclose to you what is to come. He will glorify Me, for He will take of Mine and will disclose it to you (John 16:13-14). That is why we need the Spirit of truth!

God has given us the privilege to pray to Him as “Abba” and the moment you can pray from your heart to Father, “Abba”, it is the very essence of sonship that is being demonstrated in you.

What will the final Temple look like? John shares the revelation of a new heaven and a new earth. I saw no temple in it, for the Lord God the Almighty and the Lamb are its temple (Rev. 21:22). The two circles in the diagram – heaven, earth and the overlapping area, the temple, is all leading to the merging of heaven and earth into one circle. There is no temple because the Father and the Lamb became the temple! And we are in them. God has found a dwelling place, and so have we.

He is the Lord of heaven and earth! May God open our hearts to get a taste of what awaits the Church of Jesus, the victorious bride of Christ.